Congratulations Varick Lewis on being nominated for McDonald’s All-American 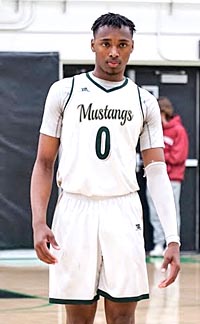 For our Northern California Boys Basketball Player of the Week honor, we head to the metro Sacramento area and a little less than 15-miles southeast of the state capitol to Elk Grove and Monterey Trail to find the award winner.

The Mustangs got off to a rough start after losing their first two games, but Lewis still had 22 and 20 points in the two losses to two very solid teams, Oakland and Livermore Granada, and in the Oakland game we observed him along with Cal-Hi Sports Managing Editor Ronnie Flores at the NorCal Tip Off Classic, and although his team lost and he did not win the Player of the Game award, most of the analysts and scouts agree the 6-foot-3 Long Beach State-commit was the best player on the floor.

Since then, Varick has helped turn things around quickly for Monterey Trail and with him taking charge the team won all three games last week to improve to 3-2 on the season heading into a trip next week to play in a tournament in Virginia.

Harold Abend is the associate editor of CalHiSports.com and the vice president of the California Prep Sportswriters Association. He can be reached at marketingharoldabend@gmail.com.